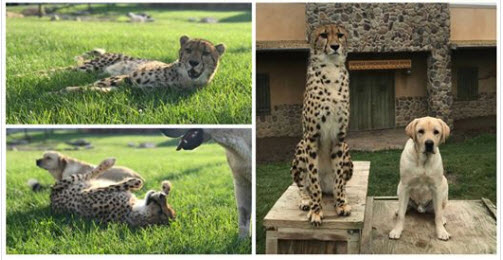 They are an unusual pair, for most of us we think Cats and dogs are known for fighting or chasing. But recently the Turtle Back Zoo just recently placed an emotional support dog with one of their cheetah’s to help her cope.

According to zoo staff, Bowie the Labrador retriever helps ease Nandi the cheetah’s anxiety. Nandi’s loud purring is confirmation she is relaxed. The pair have been together since they were just a few weeks old and became playmates from day one.

It has become common practice to provide Cheetahs with emotional support dogs because they are so shy at zoo settings.

In fact, the Columbus Zoo and Aquarium began pairing cheetahs and Labradors together several years ago. While the three dogs at the Columbus Zoo are not currently paired with cheetah cubs, they do spend time with the cheetahs and other animals. A spokesperson for the Zoo says the best time to see the dogs and cheetahs together is during the ‘Cheetah Run’ in the Heart of Africa exhibit.

Bowie and his cheetah sister are a common attraction these days, they have been inseparable for more than a year, wrestling in the snow and sharing toys.

Charlotte Trapman-O’brien an Animal Ambassador Trainer explains, “Bowie has a very important job here, which is to be kind of her confidence-builder. So, cheetahs are naturally skittish by nature, so one of the things that allows us to be able to bring her out and do educational presentations like this is having Bowie by her side.”

Bowie has similar training to that of a therapy pet for humans.

According to Bowie’s trainer, Samantha Wegman, “He’s very food-motivated. He needs to be calm, so he’s been exposed to a lot of different environments. Part of the reason he comes home with us at night is to get him exposed to all different scenarios — car rides, now honking cars.”

These best friends also have a greater purpose. There are less than 7,000 cheetahs left in the wild in Africa. Part of the program at Turtle Back Zoo is to educate people and inspire them to protect these big cats. In areas where cheetahs roam free, dogs can also help keep the cats away from farms.