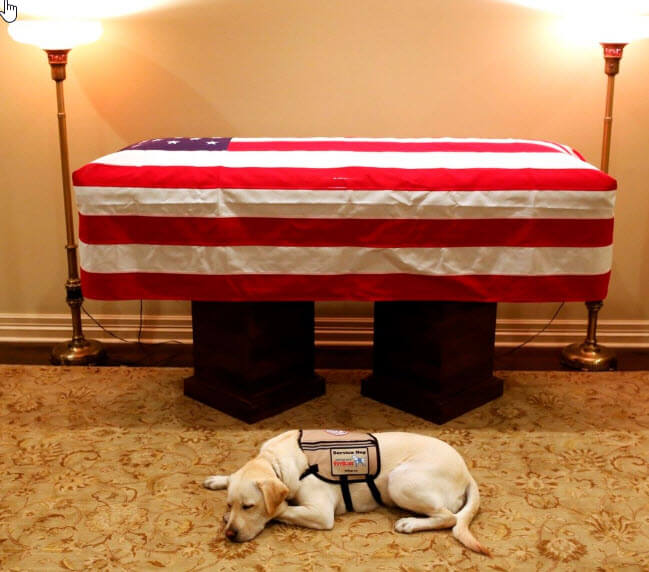 The now-viral photo of Sully, service dog of President George H.W. Bush, lying near his casket wearing his service dog vest with a forlorn look on his face has demonstrated to a grieving nation the love and loyalty of these special animals. Although Sully and Bush had only been together for four months before the former president’s death at age 94 on November 30, they had already formed a bond that is difficult to describe unless a person has experienced it for themselves.

Even in death, Sully was still looking out for his master. The photographer that Bush spokesman Jim McGrath posted to Twitter needed only two words to get its heartfelt message across: mission complete.

Sully and the VetDogs Program

The canine therapy program VetDogs brought Sully through a puppy training program at a prison in Smithtown, New York. The program provides inmates with the opportunity to teach puppies basic commands as well as housebreaking them.

Sully was named for airline pilot Chesley “Sully” Sullenberger III who steered a commercial airline to safety by landing it on the frozen Hudson River in 2009. The program matched him to Bush in June 2018 to assist him with tasks he had difficulty performing due to his vascular Parkinson’s disease. Picking up dropped items and opening doors are just two examples. Sully also had the training to support Bush when he stood from his wheelchair and to push emergency buttons when needed.

Bush staff members created an Instagram account for Sully that now has more than 214,000 followers. It has increased by approximately 115,000 followers in the week since the Twitter photo of Sully lying by Bush’s casket went viral. Account followers saw Sully the service dog treated to a birthday party and a large bone for his second birthday in July along with other everyday pictures of him assisting Bush.

What’s Next for Sully?

Although his time working with the 41st president of the United States was brief, Sully is just two years old and has a long life of service ahead of him. He will head to Bethesda, Maryland to assist wounded soldiers and active duty military personnel at Walter Reed National Military Medical Center. Sully will become part of the physical and occupational therapy program to help soldiers with their recoveries.

Bush’s surviving five children and their families have expressed appreciation that Sully will continue to serve America’s veterans. Bush himself was the last president to have served in World War II. George H.W. Bush grew up with dogs, and a photograph currently circulating of him shows him posing with the family dog as a teenager.

While he served as the nation’s president from January 20, 1989 to January 20, 1993, George and Barbara Bush kept company with an English springer spaniel they named Millie. Millie was so famous that she had a book ghostwritten in her honor. She even joined the political fray at times when Bush declared she was smarter than some of his opponents who later became close friends.

While Millie was a companion, Sully lived to serve the former president. He often appeared in pictures draped with the American flag to promote patriotism or to take advantage of his celebrity status to highlight the importance of investing in training for more service dogs.

If you are interested in obtaining a service dog registration or would just like to learn more about them, we welcome you to contact USA Service Dog Registration. We look forward to your inquiry.