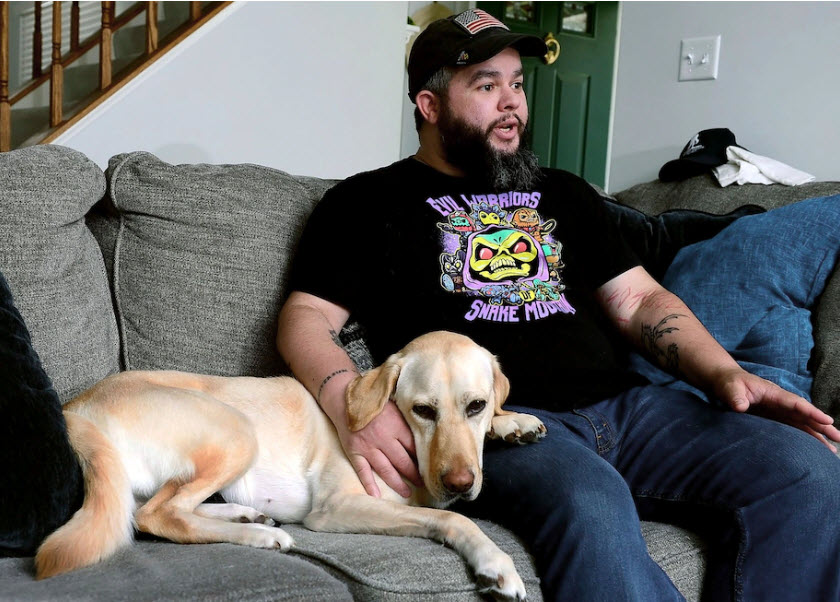 Joe Nieves, 40, sank into the couch of his living room. His PTSD service dog, Jem, a 3-year-old Labrador-golden retriever mix, hopped up next to him and rested her head on his thigh. He started petting her, running his hands over her ears.

Jem is a service dog specially trained to help veterans with post-traumatic stress disorder, like Nieves. Jem is a buffer for Nieves when he feels overwhelmed or disconnected from the world, he said.

The two were paired in March. She has helped him more than he could have imagined, he said.

Nieves, an Army veteran, was diagnosed with bipolar disorder and PTSD in 2006.

He also has anxiety stemming from his deployments to Iraq in 2004 and 2005, he said. Like many veterans, he carries invisible scars of what he witnessed overseas.

Because of Jem, Nieves went to his first event in about five years — Awesome Con, Washington D.C.’s Comic Con convention, in June, which attracts tens of thousands of “geek culture” fans.

Jem is trained to perform many tasks to assist Nieves. Most helpful, Nieves said, is how she helps him with anxiety in public. For example, she can be a barrier, standing either in front of or behind him to prevent people from getting too close.

She can enter places before Nieves does, which takes the pressure off him, he said. He’s an introvert, and people shift their attention to Jem instead of him when they walk in.

“I think it’s a side effect of the command. For me, that’s really good because the eyes aren’t on me, they’re on her … and that’s really refreshing,” he said.

A lot happened to Nieves during his deployment. To this day, one event sticks out.

One night, Nieves was monitoring a checkpoint at his base in Iraq and a mortar hit a building 100 yards from where he was standing. Six or seven soldiers were sleeping inside, he said. The roof of the building exploded in a shroud of metal.

“It was like slow motion, like in the movies. It’s just pure, slow motion. … It’s like the 100 yards just shot forward, and it’s just sitting in my eyes and in my face,” he said.

He heard the mortars before they hit. In that moment, he said, he knew what mortal fear was. He didn’t know whether to move or stay where he was to avoid getting hit.

Luckily, all of the soldiers survived with minimal injuries, he said. But the possibility of losing his entire squad that night haunts him.

In 2012, he was medically retired from the military.

Nieves tried many things to cope with anxiety, but they never stuck. For example, his wife, Katharina Nieves, got him a camera for when he went out with his two daughters.

He knew service dogs were an option, but he was discouraged from getting one. It wasn’t until around 2018, when he met the service dog of a veteran friend during Wounded Warrior Project support group meetings, that he felt reinvigorated that a service dog could help him.

In 2019, he put himself on a list for Canine Companions.

Canine Companions has six training centers across the U.S. and spends roughly $50,000 to raise and train each dog, said John Bentzinger, a public relations and marketing coordinator for the organization.

A veteran goes through an extensive process to get a service dog. Nieves said the organization’s matching process goes well.

The organization picks multiple dogs that could be paired with a veteran. It didn’t take long for Nieves to realize who his would be. It was love at first pet.

“She really was perfect, the perfect amount of energy,” Nieves said.

Jem has been a game changer outside the home, Nieves said, and has become part of his family. Nieves has another dog, an energetic and attention-seeking French bulldog named Nemesis. She’s lovely, he said, but Jem provides something different.

“The love and affection, like I’ve experienced before, but it’s different with her and not in a better way than the other dog in the way that only she can provide,” he said. “I’m eternally grateful … even for just having somebody lay on the couch with me.”