Veteran with PTSD Gets On with Life Because of Service Dog

Veteran with PTSD Gets On with Life Because of Service Dog 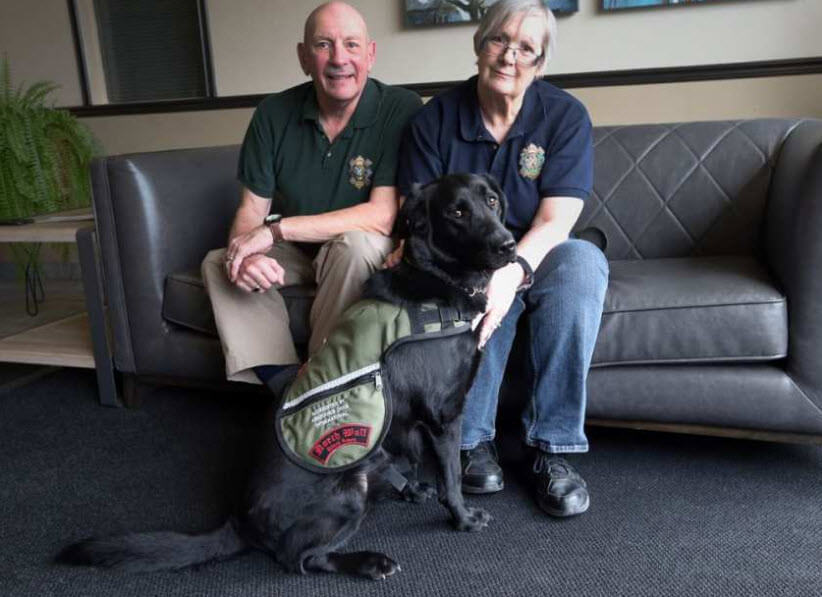 Serving in the military is difficult. It became even more difficult for Karen Sutcliffe, the first woman to serve an active part in the Canadian infantry, not in an office position. She endured physical, sexual and emotional assaults, all of which have taken a toll.

Today Karen is in her 60s and successfully getting on with her life, despite the ongoing effects of PTSD from her time in the service. She credits Bailey, a Labrador-Golden Retriever mix with a major turnaround for the better.

The Source of the PTSD

Karen came from a military family, so going into the army was a natural choice. She was athletic and became a swim instructor and lifeguard at 17. Her dad taught her to shoot as a child. The idea of entering the military just to sit at a desk definitely wasn’t her idea of a career.

Finishing second out of 30 in her unit, Karen was trained as a radio operator and sent overseas. Minor assaults from others in the service started immediately. She also suffered a major attack in the 1990s. While attending a course, she was drugged, taken to a hotel room and assaulted multiple times. As a result she had to endure reconstructive surgery and a year of psychiatric care.

Karen then got on with her life, becoming a nurse and social worker and raising two sons. But the effects lingered and got worse. Over the years, she endured flashbacks, sleep problems, anger issues, depression and suicide attempts. Eventually she isolated herself in her apartment because she couldn’t handle being around people.

Moving Out of Isolation

At this point her social worker suggested she get a service dog through the National Service Dogs program. Enter Bailey, who made a major impact immediately. As Karen says, “I went from locked in my apartment 24 hours a day to all over the city!” Beginning with careful walks around her apartment building, she expanded her reach to the park close by and eventually church and the local shopping mall.

Bailey recognizes the onset of a PTSD episode and goes to her side immediately, breaking the cycle. In public when Karen gets overwhelmed, she stands against a wall and Bailey lays down in front of her.

The result is confidence. Karen feels she can cope, even in public with people all around. She still has myriad issues that won’t go away, but she feels she can fight them, with Bailey’s help.

The National Service Dog program is the only one in Canada that is accredited by Assistance Dogs International. The group depends on donations, fundraisers and sponsorships, and receives no government funding. Fees depend on a person’s ability to pay. A local veteran’s support group, the North Wall Riders Association, helps make up the difference.

Training a dog takes two years. Bailey, as well as every other dog in the program, is valued at $30,000. This takes into consideration breeding, training and ongoing support over the dog’s career, which lasts about 10 years.

It is clear that service dogs are an essential part of the recovery process for many who have served in the military. A number of organizations help to support this mission. One of them is the USA Service Dog Registration, with a goal of making it as simple as possible to register a service dog or emotional support animal.

The service is free and involves just three simple steps. Find out more on the registration page. The website also offers a full range of service dog products, including vests, collars, leashes, and ID cards, certificates and tags.

USA Service Dog Registration also helps people with emotional support animals, offering a range of products in their ESA Store. The store helps owners make it easier for the public to identify their animals, with patches, ID cards, tags and certificates, and vests. The site also explains how the rules for service dogs and for emotional support animals in public are different.

USA Service Dog Registration is here to help. Check out the many resources available to service dog owners and people with emotional support animals.