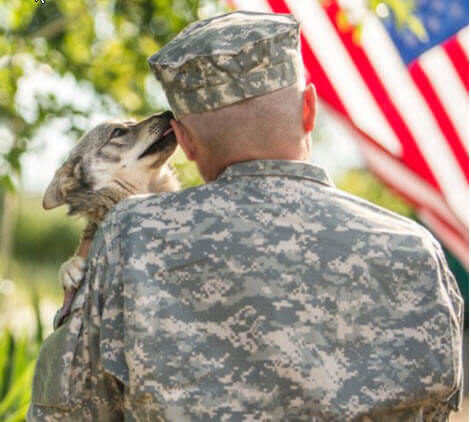 Military dogs in Afghanistan protect their soldier partners by sniffing out bombs. They also provide a connection to normal life and home. There’s nothing more real than a dog’s sloppy kisses.

The connection between human and dog, under enemy fire and so far from home, grows stronger and stronger over the tour of duty. But when it’s time for the handler to head home, what about the dog?

The dogs often end up separated permanently from their soldier buddies. Sometimes they are sent out again on a military tour. They can also end up in military kennels for months, often thousands of miles away from their former handlers.

At the end of their military usefulness, they are put up for adoption, often offered to their handlers. But the cost to reunite the two often costs several thousands of dollars. That’s more than most vets can come up with.

Flight Attendant to the Rescue

Molli Oliver has been a flight attendant for over 40 years. She is a one-woman rescue committee, attempting to get as many military dogs back with their soldier handlers. She has successfully united five dogs with their people.

Oliver picks the dog up at the military kennel. She then flies them–first class—direct to their humans. The emotional reunion is highlighted in this short NBC Nightly News video.

Her efforts started when she worked on a military charter. She listened to a soldier who kept talking about the dog he left behind, and his hopes of eventually being reunited in Missouri. On her own time and at her own expense, she got the dog from the military kennel and brought him to the soldier.

Explaining her mission, Oliver says she’s loved dogs all her life, and has a deep appreciation for soldiers and the dangerous work they do. So far, she has absorbed the cost of transportation herself. Recently she started a crowdfunding effort on You Caring, called Reuniting Battle Buddies.

She says, “I think that the dogs deserve a nice retirement because they’ve served our country.” The soldier handlers reconnected with their battle buddies have expressed deep gratitude for her efforts.

The folks at USA Service Dog Registration respect Molli Oliver’s work. They understand how important these dogs are to the people they work with.

That’s why they offer an easy 3-step process for owners to register their service dogs, emotional support animals and therapy dogs. The website also has a wide range of resources for owners, covering airline requirements, a list of trainers, information about dog placement for vets, and explanations of housing laws and state laws.

The site has a free e-book called The Complete Guide to Service Dogs and Emotional Support Animals. It has filled with essential information, tips and tricks about flying, handling housing requirements and going into public places with these dogs. Type your email address in the pop-up to get immediate access.

USA Service Dog Registration has an online store with an wide variety of equipment and accessories for service dogs and emotional support animals. These include vests, leashes, collars, ID cards, tags and patches.