I Guess Turkeys Can Fly!

I Guess Turkeys Can Fly! 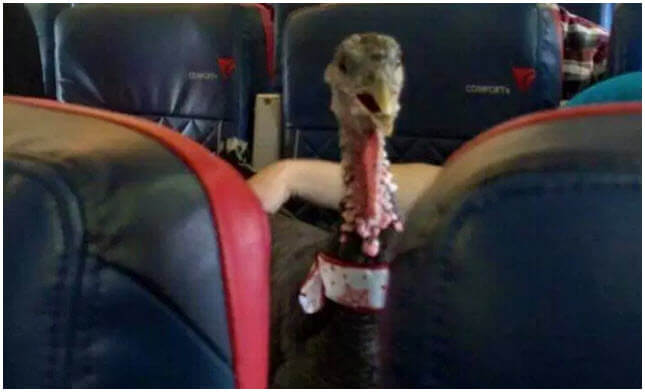 Apparently only on commercial planes (turkeys are flightless otherwise). If the turkey really was an Emotional Support Animal and the passenger provided appropriate documentation from a licensed mental health professional, then yes, that bird can fly. The Air Carrier Access Act requires airlines to allow service animals to accompany passengers with disabilities, and that guideline includes ESAs.

The Department of Transportation does not have any rules outlining exactly what kinds of animals do or do not qualify — at least not yet — but the Air Carrier Access act does say that airlines “are never required to accommodate certain unusual service animals (e.g., snakes, other reptiles, ferrets, rodents, and spiders) as service animals in the cabin.” Delta has its own restrictions on certain animals; it will not allow hedgehogs, ferrets, insects, snakes or sugar gliders, among others. It also says it won’t allow animals with a foul odor, but it doesn’t say who gets to decide what’s too foul. (Or fowl).