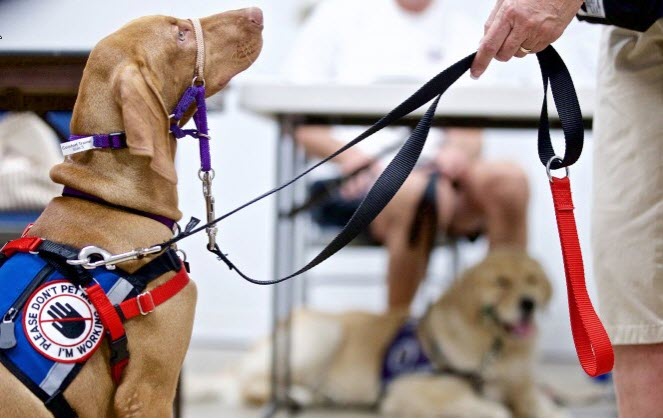 A school district is agreeing to pay up and change its ways after federal officials say a student with disabilities was denied access to her trained service dog.

The U.S. Department of Justice said that it has reached a settlement with the Gates Chili Central School District in Rochester, N.Y. in a lawsuit that the agency brought accusing the district of disability discrimination in violation of the Americans with Disabilities Act.

According to the lawsuit, the school district would not allow a student known as D.P. — who has Angelman syndrome, autism, epilepsy, asthma and hypotonia — to be accompanied by her service dog unless the girl’s mother provided a full-time dog handler. This was the case even though D.P. showed that she could control the animal with limited assistance and the dog had extensive training to respond to her, the Justice Department said.

The child’s family ended up moving to another school district where she has been able to attend school with her service dog for two years without issue. The dog is trained to detect seizures, provide mobility support and help prevent wandering and meltdowns, among other skills.

Under the settlement, the Gates Chili Central School District will update its service animal policy to comply with the ADA and train its staff on the new procedures. The district will also offer reasonable modifications like providing water for animals or prompting a student to issue commands in order to help facilitate the presence of a service dog.

What’s more, the school district will pay D.P.’s mother $42,000 to cover her expenses as well as damages for emotional distress.

“For years, the school district in this case violated the Americans with Disabilities Act by limiting this child’s use of her service dog based on unfounded assumptions and generalizations about her disabilities,” said Assistant Attorney General Eric Dreiband. “Families should not have to uproot their lives, disrupt their child’s education, move away from friends and pay tens of thousands of dollars because a school district fails or refuses to respect the civil rights of children.”

In a statement, the Gates Chili Central School District said it could not comment on individual students.

“The resolution of the case confirms the district’s position that there was no discrimination,” the school district’s statement said. “The settlement agreement between the district and the Department of Justice reaffirms that the district is not, and will not be, responsible for the care or supervision of a service animal.”