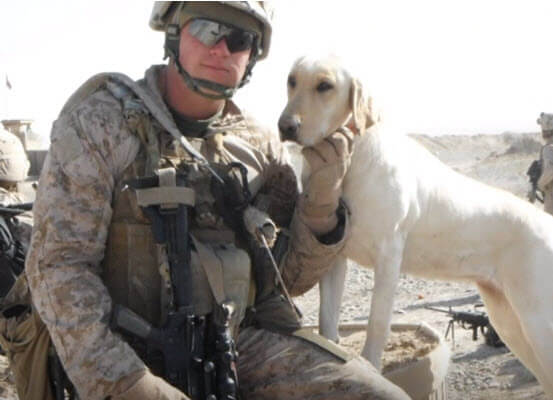 This past weekend a wounded marine veteran was denied access to a sports bar in Pittsburg to watch the Steelers game with friends. Kris Jones is a combat veteran with a service dog named Chopper. He and Chopper went with a friend to The Huddle in Pittsburgh to enjoy some time out on the town. Unfortunately, Kris and Chopper were denied entry at the restaurant.

“It was just very disappointing to me. It is just very hurtful… He’s very important to me, he’s definitely my lifeline. He makes me feel safe. A lot of veterans, you don’t want to be alone, when you’re going into a public place or a restaurant, it can be pretty stressful,”  Jones said.

Chopper is a trained service dog who helps Jones cope with PTSD. Jones served as a U.S. Marine after 9/11. Jones was injured in combat and ultimately diagnosed with PTSD. PTSD is a very common after effect of war that plagues many veterans, but many are finding that service dogs and emotional support dogs help combat the effects of PTSD. Luckily, service dogs are there to help veterans transition back into civilian life. They work hard to help veterans cope with everyday life and do things like shopping, being in crowds, and enjoying attractions.

Jones made the mistake of not identifying Chopper as a service dog, by not having his service dog vest when they tried to enter The Huddle, but he did have on his service dog collar. Sadly, Jones says he wasn’t even given a chance to show documentation that Chopper is a legitimate service dog.

Pete Wagner is the owner of The Huddle and he willingly admits that he made a mistake. He explained to WTAE News that the restaurant was very busy because of the Steelers game that week. Wagner says he just didn’t put two and two together that Chopper was a service dog.

“I want business owners, people, everywhere, children, everywhere to know that PTSD is a big thing, and a lot of veterans come home and people can look okay and look fine, but you don’t know what’s going on on the inside,” said Jones.