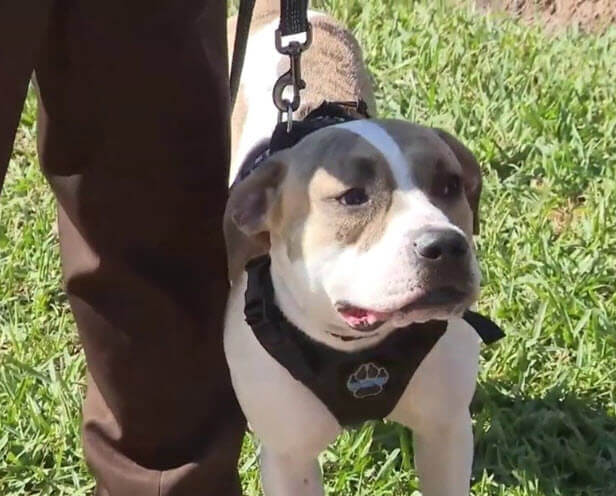 Sparky was introduced to the public on Friday in the parking lot of Petco and was welcomed by the local community.

“Sparky was selected as an emotional support dog because of his really nice temperament. We thought he had good prospects for the therapy dog,” said Dee Hoult, chief executive officer of Applause Your Paws.

But only more than a year ago, in January 2018, Sparky was having a difficult time.

“Sparky was injured,” said Alex Munoz, of Miami-Dade Animal Services. “He was hit by a car. He had all types of abrasions and lesions on his body. So our medical team took care of him.”

Veterinarians at Miami-Dade Animal Services spent months nursing him back to health, but it was his sweet nature that made him stand out as a candidate for the Second Chance Dog Training program.

“He learned how to sit, down, stay, respond to his name, not jump on people,” said Hoult.

Sparky was the star in his class and did so well with basic training he was moved into advanced training as a therapy dog.

“It’s actually not very uncommon for dogs to still be sweet and friendly, even when they have a traumatic experience,” said Hoult. “They’re incredibly resilient.”

Sparky’s handler, Officer Ryan Fields, is hoping the dog will provide comfort to school children one day, as well as victims and their families at crime scenes.

“Unfortunately, in the job that we do, we come across a lot of negative, so I want to use Sparky at that moment to connect to the community in those hard time,” said Fields.

People who have worked with Sparky said it is rewarding to see how far he has come, and they believe he’ll be a valuable asset to the community.