Mornings With Merle The Support Dog

Mornings With Merle The Support Dog 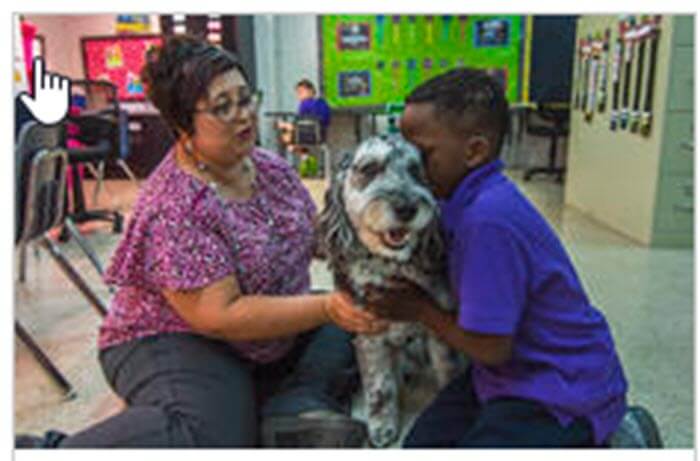 Bardstown Elementary School in Kentucky has a new canine teaching assistant in its classroom for children with moderate to severe disabilities and autism. He’s a three-year-old Australian shepherd/poodle mix named Merle, and he’s getting rave reviews from students and staff alike.

His owner, Nichole Britton, a special education teacher at BES, brought Merle in at the beginning of the school year as an emotional support dog to assist her in educating children with special needs. He’s an integral part of Britton’s class throughout the day.

Merle provides a calming influence in the classroom, and when students become particularly distressed, his close physical proximity has a soothing effect. He is trained in a therapeutic practice known as deep pressure. If a student becomes particularly agitated, he lays on their arms, legs, or back as a means of comfort.

Directing Merle through basic obedience exercises gives students who wear communication devices or have trouble forming sentences practice in verbal expression. Merle also serves as an escort for students traversing the hallways. Holding his leash helps to prevent them from wandering off. How students interact with Merle gives an indication of whether they might benefit from their own service animal in the future.

When Merle is not needed, he has a special spot beside Britton’s desk where he sits or lies down and waits until he is called upon to soothe, support, or assist the students. His hypoallergenic fur and laid-back temperament make him a safe and welcome addition to the classroom.

When Britton developed the idea of introducing an assistant dog into her classroom, she initiated a search for the right animal. Even as a young puppy, Merle showed a special propensity for service and therapy work.

In preparation for his valuable role in special needs situations, Merle practiced for hundreds of hours in a training center in Lexington called Sit Means Sit. Because of the special requirements of a classroom situation, Merle received instruction as both a service and therapy dog. Instructors from the training center also helped Britton learn to implement Merle’s special talents for emotional support into her classroom routine. Each year, Britton and Merle return to Sit Means Sit for refresher courses, and the two also share a daily regimen of exercises to fine-tune their ability to serve.

Although Britton has had 12 years of experience teaching in another school district, Bardstown Elementary School is only the second location where Merle has been able to assist her with her exceptional students. She first brought him to Taylor County Middle School, where the students were slightly older but had similar responses to Merle’s special talents.

Lance Boston, the director of special education for the school district, was thrilled when Britton suggested bringing Merle  to help in her classroom. He emphasized that most children benefit from having an animal in their environment, and that Merle is an example of the district’s efforts to meet the academic, emotional, and therapeutic needs of the children.

Above all, Merle brings joy to the children in his classroom and throughout the school. Many children look forward to their school day because they’ll have a chance to greet and spend time with Merle.