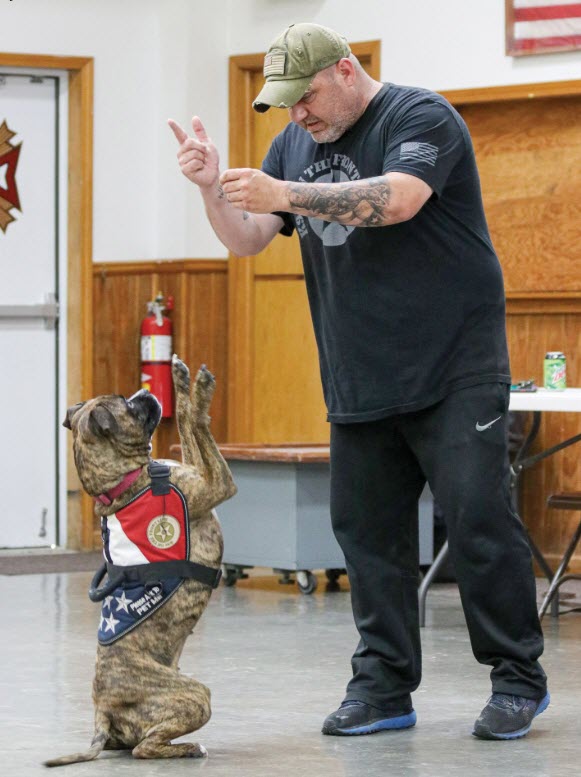 After two rough deployments overseas, Jason Howe ended his U.S. Navy career in 2007. However, transitioning to civilian life was anything but smooth.

He has suffered from post traumatic stress disorder. To this day, he prefers not to talk about what he encountered during his service in the Navy.

“I wanted to take the pain away from whatever I was thinking about after doing two deployments,” he said.

He turned to drugs. He lost his children, house and car, and he was bouncing from job to job.

“I woke up and wanted to end my life. I didn’t want to be here anymore,” he said. “I felt like the world didn’t understand me.”

He went through a rehab program in Kansas, then moved from Jefferson City back to his native state of Maine. It was there he came across an old friend who had a service dog.

The friend put him in contact with K9s on the Front Line, a nonprofit organization that provides, certifies and trains service dogs for military veterans affected by post traumatic stress disorder and/or TBI at no cost to the veterans and free service dog registration.

The organization gave him a dog that was two days from being euthanized in a kill shelter. He named the dog Sobee after a St. Louis Blues player.

It changed his life.

After attending a K9s on the Front Line event, he was hooked on the organization. After 18 weeks of training, he and Sobee graduated with 340 hours of training, more than twice the required amount.

With the graduation, Sobee officially became a service dog. Among other things, it taught her to sit, lay down, come when called and ignore other dogs and people in public.

Her main job, however, is to watch Howe’s back to make sure he’s safe. If he has a panic attack, Sobee jumps on him to “bring me back” to the present reality, he said.

After going through the program, Howe moved back to Jefferson City, where he now volunteers with K9s on the Front Line as the Midwest coordinator. To date, he’s used service dogs to help more than 50 veterans.

“It’s my way of giving back to my fellow brothers and sisters,” he said.

Last year, Howe delivered dog food donated by Diamond Pets to homeowners who were affected by the May 2019 tornado.

“One of my biggest things is being a voice for veterans or even people struggling, and leading by example,” he said. “It’s not the end of the world. They can overcome it. I like to give back to the same community that’s so loving and caring to us.”

Howe and Sobee are in the running for two categories of the American Humane Hero Dog Award. Of 800 dogs in the service dog category, Sobee is currently in the top three.

The winners, determined by online votes and judges, will get a trip to Hollywood, where they will be honored on Hallmark Channel’s nationwide broadcast of the American Humane Hero Dog Awards in October.

“It feels pretty amazing, knowing where I was four years ago, and where Sobee was,” he said. “Both of us were kind of on our death beds, you could say, and we’ve both kind of saved each other. She’s given me a new life, and I’ve kind of given her a new life. She’s a pretty awesome battle buddy.”