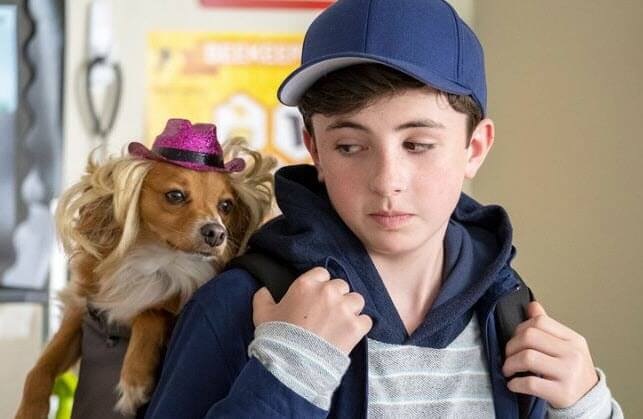 Nothing better than a rainy night and a good binge-worthy show, personally I’m always on the lookout for a show the whole fam can watch together. Throw in a healthy dose of feel-good moments and teachable lessons, and you’ve got a winner. Which is why I was intrigued and cautiously optimistic when I heard about a new Netflix show called “The Healing Powers of Dude.”

This new family show centers around Noah, a middle schooler with a severe case of social anxiety disorder. In fact, his social anxiety is so severe that his parents convince him to get an emotional support dog to take to school with him.

Netflix does a great job demonstrating what it feels like for someone living with social anxiety disorder – and what it can also feel like to have someone really understand you. Along with a super loving and supportive family, Noah finds companionship in Dude his emotional support animal and his new friends, Simon (played by Mauricio Lara) and Amara (played by Sophie Kim).

This new Netflix series was created and produced by Erica Spates and her writing partner/husband, Sam Littenberg-Weisberg. The story is loosely based on Littenberg-Weisberg’s younger brother, who is also named Noah, who has social anxiety disorder. Spates says ” that Noah really struggled with the transition to middle school”.

“Social anxiety disorder is the intense fear of being judged or rejected in a social or performance situation,” Spates explained. “In the real Noah’s case, there wasn’t a sarcastic talking emotional support animal voiced by Steve Zahn, but there was an incredibly supportive family and group of friends.”

“This show was foremost written to be entertaining for the whole family, so we hope people will laugh a lot and maybe cry a little,” Spates said. “We’d love for our show to help families start difficult conversations about mental illness and disabilities in general.”

In the short time since it was released in January, it seems to be doing just that.