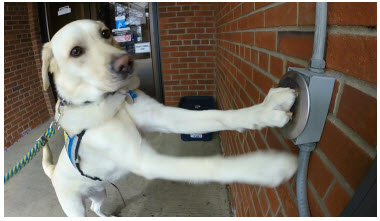 For many of our clients with disabilities many tasks can be extremely difficult.  But with a service dog by their side independence can be very real.

A national non-profit called Canine Companions for Independence, or CCI, breeds, trains and matches service dogs with individuals that have disabilities and need them the most.

Morgan McCarthy from Saratoga Spring was someone in need of a service dog.  Recently she was paired with a handsome service dog named Dewey, now her whole life has gotten much easier. Twenty-One-year-old Morgan is no longer seen as a young lady stuck in a wheel chair struggling to overcome her disability, now she feels much freer.

“Part of my life before having Dewey was always having someone around me and now I don’t necessarily have to do that,” said Morgan.  Prior to having Dewey her Mom Prudence was always by her side, Morgan suffers from Cerebral Palsy which is a neuromuscular disease.

“We all walk around every day with an invisible backpack full of troubles. And I don’t know what your troubles are and usually you don’t know what mine are. A lot of times you can see Morgan’s,” said Prudence.

Many of the issues that kept Morgan from getting around have been eliminated because of her new service dog Dewey.  Dewey is now helping her with many daily activities like opening a door, little things like this can be very challenging for someone suffering with Cerebral Palsy.

“Thank you,” said Morgan as a woman opened a door for her.

“” It’s embarrassing to have to constantly ask for help like that, “said Morgan.

That’s where Dewey’s ability to follow commands comes in. Morgan can tell him to press a button and he can actually open doors for her.

“He does most of the work. I don’t have to do a lot on my end. And I can just go about my day, “said Morgan.

It took about two years and many people to get Dewey ready for his new owner and he is doing a wonderful job as a service dog.   “They are cut out for this. They go through 2 years of training for this,” said Morgan.

That’s where puppy raisers like Chris Cullen and her family come in. Over more than a decade, the Cullens have trained 3 CCI puppies. And now, they are on their fourth.

“It’s our calling. We’ll keep doing it as long as necessary because there’s not enough trainers out there, “said Chris Cullen.

“It was just the way he looked at us. He leaned in. And I just knew,” said Prudence.

Since then, Morgan’s life has been forever changed.

When asked if Morgan could be without Dewey she responded “Not anymore. I mean I’ve waited a long time to get him. And now I just feel like he’s a part of me. Those eyes, they tell you a lot. He just wants to please and he’s the best dog ever.”

CCI is always looking for me people to help raise companion puppies that one day will grow to help someone in need, just like Morgan.