Vet With PTSD Gets a Wonderful Surprise

Vet With PTSD Gets a Wonderful Surprise 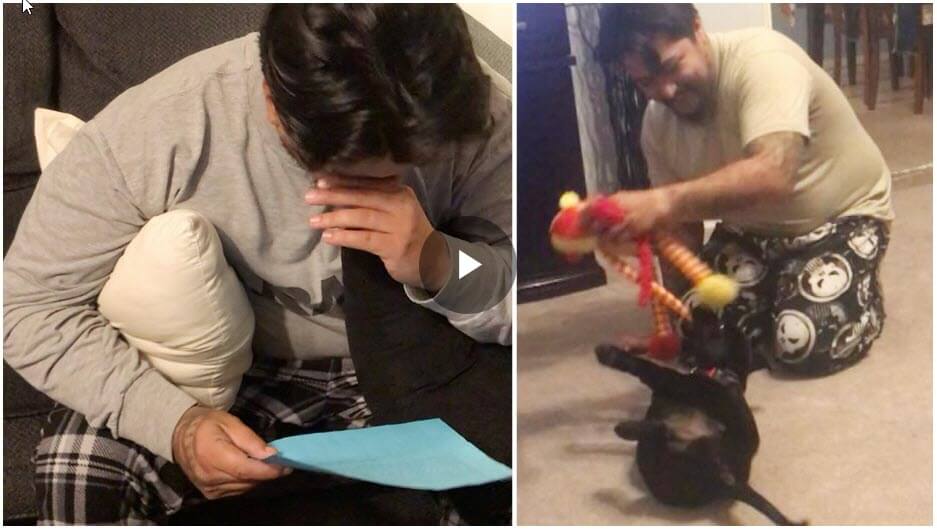 A Texas Veteran that has been struggling with PTSD got a wonderful surprise from his family, a new service dog!

Rudy Pena, of Amarillo, couldn’t believe his eyes as he read a letter his kids Aubrie, Trever and Adrian presented him, explaining that they were giving him a service dog to help combat his night terrors and depression.

“I’m very lucky to have a family that cares and loves me enough to find him for me,” he told T&T Creative.

Pena has done two deployments as an Army Combat Medic for past 10 years and has been recently diagnosed with cancer.

He has been battling PTSD since returning from service.

“We’ve tried everything possible but as most veterans know, there is no cure and memories never go away,” his wife Samantha said. “He has seen his brothers die in his arms and the memories haunt him.”

Their family has been considering a service dog for years, but they were never been able to afford the $20,000-$30,000 that goes along with the purchase and training.

But when Stephanie met a local breeder and trainer, offering an AKC-registered Labrador for an affordable price, she jumped at the opportunity.

Her husband and his pup, Justice, hit it off immediately.

“Justice and I immediately bonded — he is my battle buddy for life. He has had an amazing impact on me. He never leaves my side and somehow knows when I’m upset laying his head on my lap to calm me down,” he said. “We like playing fetch, going on walks and my favorite is just laying with him on the couch.”

One Reply to “Vet With PTSD Gets a Wonderful Surprise”