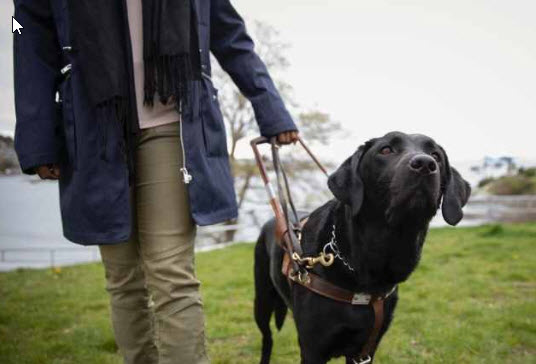 Most of us are familiar with service dogs and their important purposes for those in need. For those who don’t know what a service dog is, they are specially trained pups who help individuals with physical disabilities such as visual, hearing, and mobility impairments.

They can even detect certain diseases like diabetes and alert if a seizure is oncoming within a person. And although there are other specially trained dogs like emotional support animals and therapy animals, they are not the same as service dogs.

So take a look at these five amazing service dogs in action and see how important they are in the lives of the humans who need them.

There are some dogs who have a natural instinct when it comes to detecting things such as oncoming seizures in humans. Take the pup in the video above, for example.

Colt is a Weimaraner/English Labrador mix who was trained by his human mom to be her service dog. After being hand-picked by her owner and a behavioralist, Colt’s main job is to alert when a seizure is coming.

The intro explains that when Colt detects an oncoming seizure, he lays his head on his human to warn her. When a seizure starts, Colt will then place his whole body on hers to make sure she stays still as the seizure runs its course.

It’s an important video showing the job of a service dog.

In the news special above from Singapore Now, we learn the importance a service dog can have with someone who is visually impaired.

Cassandra is a young woman who is legally blind. At first, she relied on using a walking cane to help her get around, but as she explains in the video that it did not always help, as she would walk into lamp posts and strangers.

It was so bad that when she bumped into posts, she would need x-rays and stitches. That’s where Esme came in. The Golden Labrador Retriever, Esme, helps Cassandra avoid obstacles in her path when she goes around the city.

It’s a beautiful piece that makes you realize how special dogs can be.

If there’s one thing we all know about dogs, it’s that they have a very acute sense of smell. In fact, they are able to detect things through smell like insulin levels of someone who is diabetic.

In the video above published by Banner Health, we learn about Nick, who has type 1 diabetes. His service dog, Qupid, a Labrador Retriever, however, is able to detect if Nick’s sugar levels are high or low ten to 15 minutes before a meter can.

If Nick’s insulin levels are low, Qupid will bow, and if it’s high Qupid will shake his hand.

It’s a great way to warn someone with diabetes before something bad might happen.

4. Hearing Dog, Echo, Gives Deaf Child All The Confidence In The World

Not only are service dogs able to help with the daily needs of those who have disabilities; they can also improve their moods and give them a confidence they might otherwise not have.

In the clip above, we listen as Zach, an eleven-year old boy, and his mother explain how important his service dog, Echo, has been to him. Zach has been deaf since birth, and it has affected his confidence and even gives him trouble sleeping at night.

When they adopted Echo as his service dog, that all changed. Not only does Echo assist Zach with alerting him of different sounds around him, he has also managed to improve Zach’s confidence and anxiety.

5. Even The Smartest Service Dogs Can Make Mistakes

For a dog to be a service animal, there are many inherent traits they need. They have to be naturally calm, easy to train, and friendly. But even the smartest and most well-trained service dogs can make mistakes sometimes.

In the clip above, we catch Harlow, a Golden Retriever service pup who assists his pet mom with retrieving things she might need. Throughout most of the video, Harlow is able to retrieve everything that is asked of her, until she has to go to the kitchen to get a bottle of water.

She returns instead with a bottle of Ranch dressing at first, but thankfully she gets it right the second time.

It’s an adorable moment from one of the funniest service dogs out there!

What do you think of these five service dogs in action? Have you seen a service dog do amazing things? Let us know in the comments below!