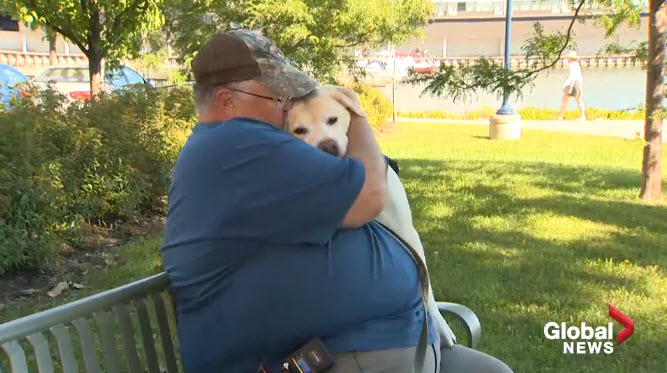 Brown had been suffering from debilitating PTSD since 2015 and on medical leave.  His service dog River changed his life, prior to having his service dog he says “I had been a prisoner in my own home for a couple of years and when I found River, we were matched together, and I was able to go out and do things that I hadn’t before”.

Brown decided it was time to give back after realizing how many others may be suffering in silence.  “The wait list is three or four years long for a trained service dog. In the meantime, we are losing members and civilians due to wait lists,” he said.

In Canada and the United States, the law allows for people to self-train their own service dogs. But Brown says it takes a dog with a certain kind of temperament to qualify.

“We might have dogs that are not well suited and so we wanted to ensure that we had some guidance,” he said.

That is why Brown is acting as a mentor and is being guided by the teachings of a master trainer from Nova Scotia.

Brown points out that this group is not just about dog training and service dog registration. Ongoing support for people suffering from PTSD is key to the program’s success.

“The real magic of the program is the peer support,” he said.